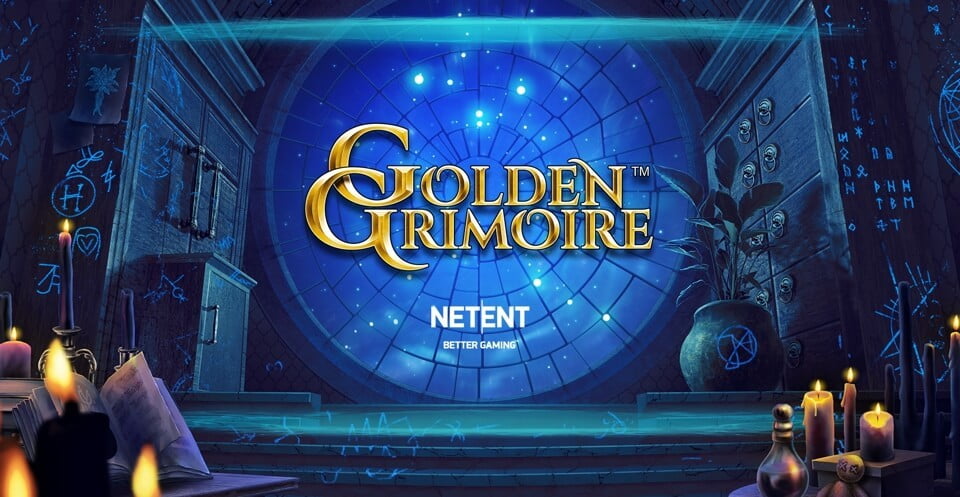 Golden Grimoire is a video slot from Netent that seems to be based around a mythical kind of theme. The slot is built around a 5-reel, 4-row format and there’s a total of 40-fixed paylines on offer.

You’ll find yourself able to play the slot from between 20p and £400 per spin, and NetEnt themselves have stated that the slot is built to a low-to-medium variance.

Play Golden Grimoire™ slot game at any of these recommended online casinos:

A Slot Steeped in Ancient Magic.

Like you’ll recognise from most of NetEnt’s games, Golden Grimoire offers some pretty impressive-looking graphics and animations, and the game is set within a spooky-looking room, with candles and potion vials visible in the foreground.

In the background, you’ll see a giant circular window, with a night sky visible inside. There are some cool sound effects in Golden Grimoire as well, as this helps to make the game even funner to play!

You’ll see a number of symbols on the reels, and the game’s low-value ones are represented by playing card suits, including hearts, spades, clubs and diamonds.

The game’s higher-paying symbols are more theme-specific and include a beetle, a snake, cephalopod molluscs and spiders. The spider is the highest-value symbol, awarding a payout worth 1X for matching a 5-of-a-kind combo from left-to-right.

The main bonus round (the Free Spins feature) in Golden Grimoire is triggered by landing three of the scatter symbols on reels one, three and five. You’ll then trigger the feature, and you’ll begin by being awarded ten free spins.

During the bonus, you’ll want to keep a close eye on the Mystery Symbols. If you manage to land any of the mystery symbols in view, they will then stick in place, and remain there for the rest of the bonus.

On each spin, all of the mystery symbols that are on the screen will reveal the same symbol. So, if you’re lucky enough to fill a screen with a high number of mystery symbols, you’ll be guaranteed some pretty decent wins.

It’s possible to win up to 1,000X your stake during the bonus – and while that may not sound much, it’s an achievable goal. It’s not, unfortunately, possible to re-trigger any more spins during the free spins round.

One thing we’ve become used to seeing from NetEnt is the graphical quality we’re used to seeing within their games. Golden Grimoire is no exception, and it’s clear the Swedish-based game developer have gone ‘all out’ to ensure the game looks great and plays well too.

One thing we’re not overly happy about is that the bonus round’s potential seems to be capped at around 1,000X your stake. Of course, this isn’t exactly bad – but in today’s ‘high variance slot popularity’ era, it’s surprising that NetEnt decided to cap the bonus here. Still, it appears to be an achievable target, so expect to see some players hitting this cap.

Overall, Golden Grimoire is a decent offering from NetEnt, and we think it will prove to be quite a successful slot!